Their research cooperation on digital historiography is in full swing when Short Term Grantee PD Dr. Thomas Wallnig from the University of Vienna and his Bayreuth host, PD Dr. Stefan Benz, enthusiastically report on the results so far. During the interview, they talk impressively about the importance of contemporary historiography, compelling synergies between the humanities and data sciences and the value of a Short Term Grant in everyday research. A conversation in three parts. 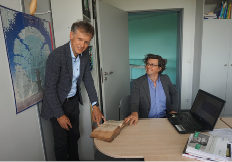 What is the purpose of your joint research within the framework of the Short Term Grant?

Stefan Benz: Everything we do with the past is historical culture: how does a society deal with the past and how do stories about this past spread? The news is full of historical culture, of commemoration days, five years ago was this, twenty years ago was that, yesterday was something. These are always narratives that existed even in the 15th century. I come from the didactics of history and describe theoretically what the consequences of this historical culture are and what the mass of actors produces. And 'mass' already refers to the databases and large amounts of data – the starting point for our collaboration in the field of digital humanities with this Short Term Grant.

Thomas Wallnig: We are looking at how narratives can be analysed in historiographical texts. At least since the linguistic turn in historiography about 30 years ago, we know that historiographical products can be regarded as literary products: Who are the actors? How are these stories told? How are they substantiated? How is evidence generated? That is a critical approach to the history of historiography. The other issue is the amount of data. The canonical narrative about our history, the history of the West, is based on a very narrow sample of events and people. If you compare that with what was actually present in the historical consciousness of earlier generations, you get a completely different picture. The mass of material available digitally now makes it possible to create a different, not uncontroversial picture.

Franco Moretti, the well-known literary scholar from Stanford, has presented a new way of writing the history of the novel with the approach of Distant Reading, namely not along the literature as canonised in the great national literary histories, but by using the breadth of the digitally available material. That is the approach. And now the question for us is: how do I access this material? There are many scans, many digital copies. How do I now a, prepare these materials so that I can work with them analytically and b, how do I then want to work with them analytically? 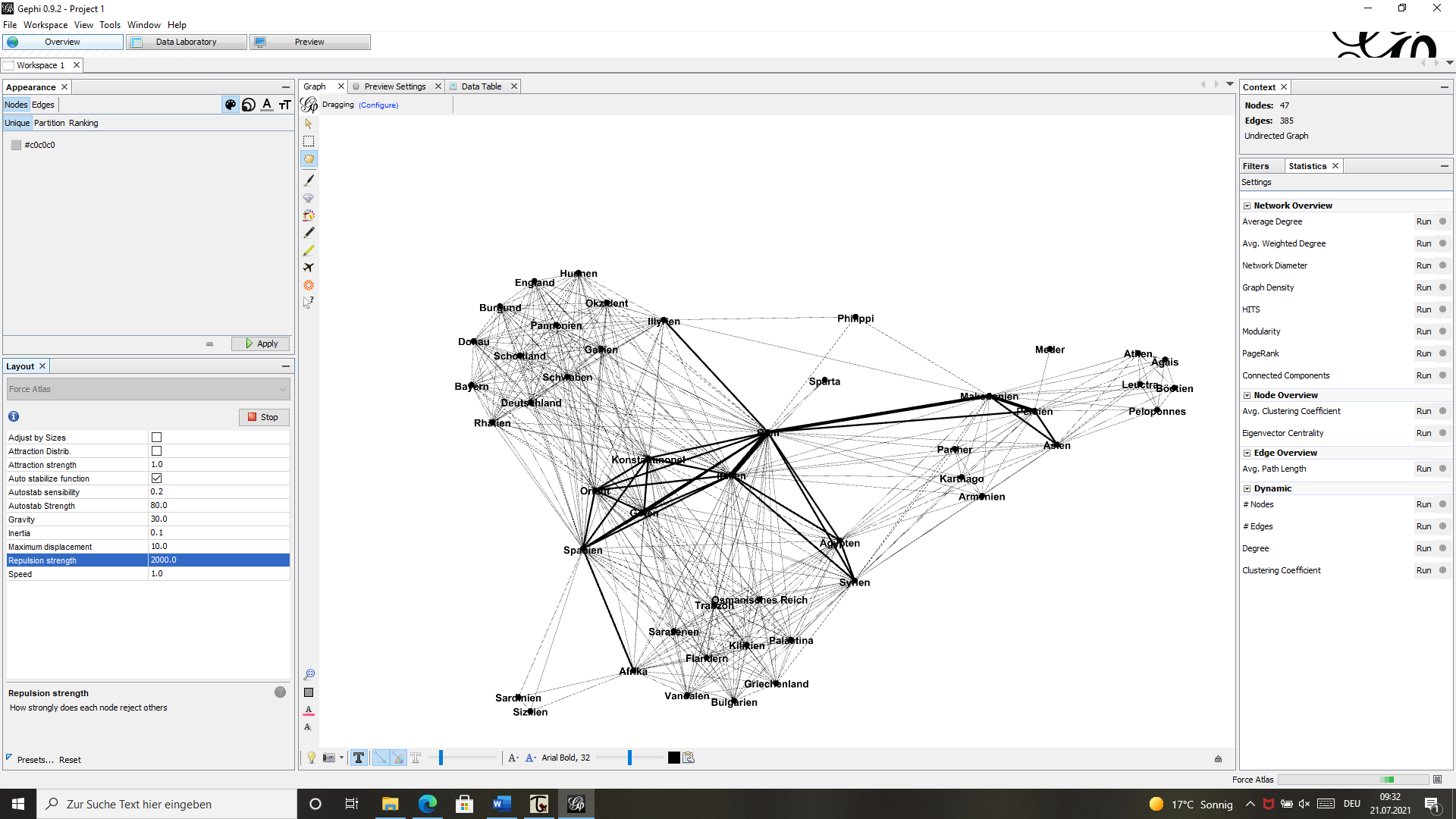 What happened during your first stay in July?

TW: We spent these two weeks looking at examples, e.g. the “Teutsche Florus” (1647) by Eberhard Wassenberg and “Einleitung zu der Historie der vornehmsten Reiche und Staaten” (1682) by Samuel von Pufendorf. The past two weeks had the purpose of a propaedeutic study: to play through the routines, to measure duration, to evaluate the quality of the automatically generated transcriptions, basically to build a framework for further work.

SB: Pufendorf is considered a classic of historical literature because in the 17th century he delivered what was considered history in the 19th and 20th centuries, namely the history of states interacting with each other. And we have represented that digitally and implemented his text as a graphically descriptive network. We also look at the vocabulary: If Pufendorf uses the word ‘endlich’ about 600 times in the corpus, that also says something about the text. Wassenberg, on the other hand, is considered a hidden champion. But the narrative he shaped of the Thirty Years' War still shapes school textbooks today, e.g. through the division into war phases, the Bohemian War, the Danish War, etc. We first had to make this text electronically readable. Through this indexing, we generate research data on which we base our analytical work.

In this analysis, a contrast between popular and academic ideas of history also emerges. This is playing a big role at the moment: Fake News are narratives that are not socially accepted, therefore these news become ‘fake’. Here we need critical rationalist procedures from historians and institutional school teaching worldwide to be able to critically examine these narratives.

But we do not lose the classical methods; on the contrary, we have to evaluate: Was this a relevant text? How can we determine this relevance? And who copied from whom? We can also run plagiarism software over the historians' production of the 17th and 18th centuries and see how discourses feed each other.

What can historiography “achieve” in the 21st century? What relevance does it have in the present and future for your work as a scholar, but also for society?

SB: Society will have to realise above all that historiography is a plural word: one must always consider at least two perspectives. With the invention of printing, for example, texts became accessible that contradicted each other. Since the 16th century, encounters with American cultures, which had their own texts and histories, took place above all, followed by encounters with China, with Chinese culture and historiography. As a result, European chronology was partially overturned. Newton’s research was mainly based on organising the different time calculations of Christianity, also against the background of Chinese time calculation; it was not primarily about great formulas, but about history and simple chronology! So the achievement is no longer that history should provide a fixed meaning, but rather that we must understand histories in the plural, which allow us a horizon of interpretations (according to Koselleck). So we create a space in which we can orient ourselves and move as freely as possible, in accordance with our pluralistic order.

But this must not lead to relativism. We need the rationalisation of science. Here, the digital plays a major role as a necessary tool. We develop standards, for example in text analysis, and discuss at which plausibilities a discourse emerges or if it is still coincidence. In other words, the rational verifiability of stories is an imperative part of the plurality of our society. Modern methods of historiographical analysis, such as the ones we are trying out now, play a major role in this because, firstly, they support the initial thesis and, secondly, they provide new intersubjective tools so that interpretation no longer remains in the subjective perspective of the respective interpreter of a text.

TW: Historical knowledge must be based on established truths. By comparing texts, books, the materiality of the source, we historians have always determined the authenticity and credibility of a source. Understanding the modelling and genesis of data, the different roles of authorship - this is where critical analysis of these history-making processes urgently needs to be brought into the 21st century. This data literacy is the basis for empowering students, future teachers and academics with tools to distinguish true from false, valid explanations from less valid or inconclusive ones.

The genuinely historical mode of knowledge has always had to assert itself, for example against theology, it has always smacked of the indeterminate and subjective. Precisely this form of historical knowledge must now assert itself against the data sciences. Our public perception is full of assumptions about the future that project the past based on mathematical models, think of the Covid numbers or economic growth. It is managing historical material based on more or less flexibly designed algorithms. Thus, mathematics and statistics are the sciences on which the historical mode of knowledge must work. Data sciences can cut the ground from under classical historical hermeneutics feet. After all, is the cognising subject not obsolete where a mathematical model generates cognition? We all still understand far too little about data science to be able to conduct this conflict at eye level.

So when we deal with banal statistical algorithmic procedures, it also has the purpose of saying: This is what happens anyway. And it's not enough to say: Written letters work the same way as Tweets, learned correspondence is a form of Facebook, but we want to understand the analytical procedures if we don't just want to read another book and then write another book about it.